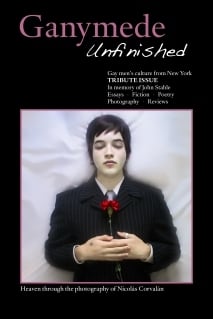 Ganymede Unfinished: A Tribute to John Stahle and his Journal Ganymede (315 Pages!)

Ganymede Unfinished – A Tribute to John Stahle and his journal Ganymede.

John Stahle and Ganymede changed the face of gay publishing and introduced the world to the next generation of queer poets, writers, and artists. Though John died in April of 2010, his legacy is evident in this 300-plus page, 6×9 perfectly bound journal published in his honor.

PAPERBACK VERSION SOLD OUT through the SRP Store but still available through Lulu by CLICKING HERE. PDF version available below.