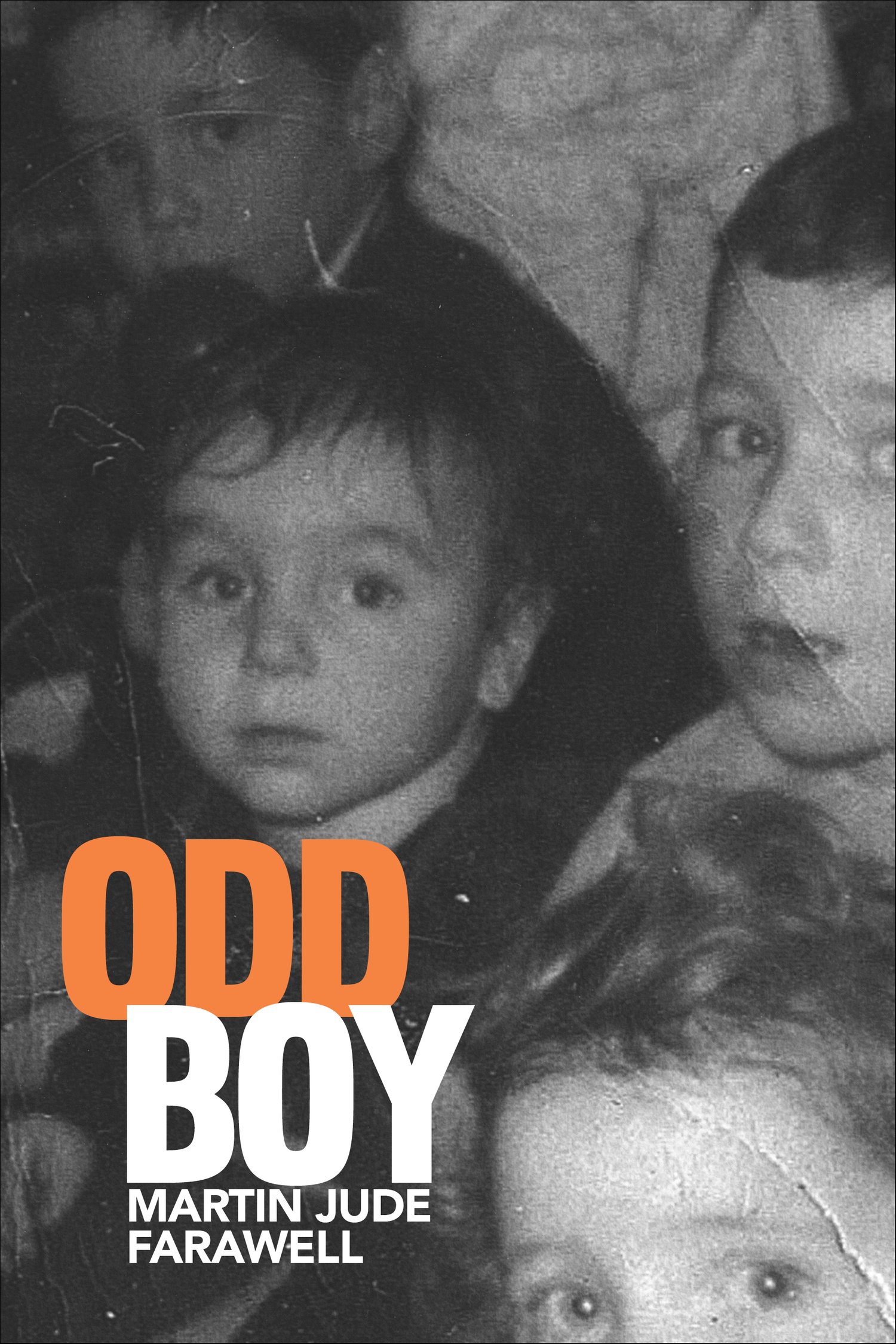 In poems at once dazzling and trussed to quietude, Martin Jude Farawell’s Odd Boy traverses a fretwork of silence and sonority. From the solemn pews of a Catholic childhood, the improvised dance floor at his wedding, and the mossy underbelly of late and early spring times, Farawell explores what it means to learn and unlearn his constellation of selves: boy, son, brother, husband, human, believer in the beauty of the smallest hour. Whether imagining the creation of the original family through the Biblical canon or recounting the violence of his own, Odd Boy is an atlas for the pursuit of a fierce gentleness. Farawell’s poems pursue desire and its specter in landscapes large and small, perennially unafraid of their own song, unafraid to take us to the heart of it: “But now, / it is the very autumn / of autumn. / What was it? / What I wanted?”

“There is a burnished clarity gleaming in the poems of Martin Jude Farawell, born of urgency and honesty, tenderness and rage, suffering and transcendence—poems from the marrow of life and death itself. In vivid, even visceral language, the poet evokes the breath of an alcoholic father, the din of voices warring just outside the door, the failure of a ‘lapsed Catholic’ to suppress the giggles at a funeral, the statues of saints helpless at the deathbed, the strange terrors of carousel horses at the pier. ‘If I sing joy, even sing joy, I weep,’ declares Farawell, and yet there is song, even joy, as he transforms the history of violence into art, refusing to pass that violence along to the next generation, defiantly rejecting Abraham and Isaac for the call of the birds and the sea. We need this deeply human, and humane, song. Keep singing.”

- Martín Espada
“Martin Jude Farawell’s Odd Boy summons us to the very heart of beauty with an irrepressible voice: 'I was walking / my awkward, unbalanced act / between boy and man…' These poems travel far inward to the land of suffering and the road out, with such lovely, ecstatic lines that collide with the courage of saying things clearly. We are fortunate witnesses to a life fully human, a speaker of great depth who has chosen to sing now: 'To spend your song / singing your way there, / is to be less / of a singing thing / here.' A remarkable book.”
- Jan Beatty
“Whether they dramatize scenes from a Catholic boyhood of smirking resistance to orthodoxy or the paralyzing fears of bodyhood in a violent family, Martin Jude Farawell’s poems in Odd Boy introduce us to a titular hero whose purpose in living is simply to survive and grow past despair into an open and affirmative manhood. It’s an earnest quest enacted in richly textured, alertly observed poems that hymn the liminal places of body, nature, and myth where hope might happen, where the self is lured toward risk and vulnerability, those necessary preludes to love. We have here an eloquent singer of both joy and terror—those complex, linked promises that are the meaning of our mortal world. Welcome a beautiful singer of that world, which is his world and which, through these wondrous poems, also becomes ours.”
- Gregory Orr
---

Martin Jude Farawell is the director of the Geraldine R. Dodge Poetry Festival. His poems have appeared in the chapbook Genesis: A Sequence of Poems (New Spirit Press); in journals such as Cortland Review, Orion, Paterson Literary Review, and Southern Review; and anthologies, including Outsiders and The Traveler’s Vade Mecum. His plays have been produced in theaters from South Africa to Los Angeles. A graduate of New York University’s Creative Writing Program, he has been the recipient of a writing fellowship from the New Jersey State Council on the Arts and a frequent Pushcart Prize nominee. He lives in rural Pennsylvania with writer Cheryl Solimini. The Moon Over Edgar by Ian Felice
$15.00
SWALLOW by Sam Rush
$15.95
More Than Organs by Kay Ulanday Barrett (ALA Stonewall Honor Book/Lammy Finalist)
$18.00
The God of San Francisco by James J. Siegel
$18.00
original kink by Jubi Arriola-Headley
$18.00
So Long, and Thank You for All the Waterproof Mascara. by Lilith Mae McFarlin
$18.00
Slide to Unlock by Julie E. Bloemeke
$18.00
Connor & Seal by Jee Leong Koh
$15.95
Have You Seen This Man? The Castro Poems of Karl Tierney
$18.00
Incandescent by Kai Coggin
$18.00
Boss Broad by Megan Volpert, Georgia Author of the Year Award Winner
$19.95
Inclined to Riot by KMA Sullivan
$15.95
The Uninhabitable by Jesse Rice-Evans
$15.95
Black Dog Drinking from an Outdoor Pool by Zach Ozma
$18.00
Anyone Will Tell You by Wendy Chin-Tanner
$15.95
WWJD and Other Poems by Savannah Sipple
$15.95
Othered by Randi M. Romo (ALA Top Five Favorite!)
$18.00
Sister by Nickole Brown
$19.95
Midnight in a Perfect World by Collin Kelley
$15.00
Not Everything Thrown Starts a Revolution by Stephen S. Mills
$18.00
We Go Seasonal by Robert Siek
$18.00
Marianna's Beauty Salon by Bushra Rehman
$14.95
Inside/Out by Joseph Osmundson
$17.00 — Sold out
Prayers for My 17th Chromosome by Amir Rabiyah (Publishing Triangle Finalist)
$14.95
DIG by Bryan Borland (Stillhouse Press/George Mason University)
$17.00 — Sold out
The Carnival of Affection by Philip F. Clark
$14.95
Killing Summer by Sarah Browning
$14.95
Anthem for the Wounded by M.A. Vizsolyi
$14.95
Colin Is Changing His Name by John Andrews
$14.95
LAMBDA WINNER! Mysterious Acts by My People by Valerie Wetlaufer
$14.95
Drowned: A Mermaid's Manifesto by Theresa Davis
$14.95
Having a Coke with Godzilla by Kazumi Chin
$14.95
A House Made of Water by Michelle Lin
$14.95
Ache by Joseph Ross
$16.95
War Poet by Rob Jacques
$16.95
Avowed by Julie R. Enszer
$14.95
DNA Hymn by Annah Anti-Palindrome
$17.00
A(Live) Heart by Imani Sims
$12.00
The Dozen by Casey Rocheteau
$14.95
Lambda Finalist/ALA Over the Rainbow Title! Teaching a Man to Unstick His Tail by Ralph Hamilton
$12.00
When I Was a Twin by Michael Klein
$14.95
ALA Over the Rainbow Title! Call Me by My Other Name by Valerie Wetlaufer
$14.95
Ark by Ed Madden
$14.95
Mother May I by Tina Parker
$14.95
ALA Over the Rainbow Title! Running for Trap Doors by Joanna Hoffman
$14.95
Skin Shift by Matthew Hittinger
$12.00
ALA Over the Rainbow Title! City of Starlings by Daniel Nathan Terry
$14.95
Inheritance by Steven Reigns
$14.95
ALA Over the Rainbow Title! Erebus by Jane Summer
$24.95
Turn by Wendy Chin-Tanner
$14.95
ALA Over the Rainbow Title! The Café of Our Departure by Priscilla Atkins
$14.95
From the Belly by Virginia Bell
$14.95
ALA Over the Rainbow Title! A History of the Unmarried by Stephen S. Mills
$14.95
ALA Over the Rainbow Title! The God of Longing by Brent Calderwood
$14.95
ALA Over the Rainbow Title! The Erotic Postulate by Matthew Hittinger (Original Cover)
$14.95
The Erotic Postulate by Matthew Hittinger (Alternate Cover 3)
$14.95
Only Ride by Megan Volpert
$14.95
ALA Over the Rainbow Title! My Life as Adam by Bryan Borland
$12.00
ALA Over the Rainbow Title! Render by Collin Kelley
$14.95
*LAMBDA & THOM GUNN FINALIST* The Talking Day by Michael Klein
$14.95
Contemplative Man by Brock Guthrie
$14.95
Boys have been . . . by Christopher Gaskins
$14.95
Sisterhood by Julie R. Enszer
$14.95
Purpose and Devil Piss by Robert Siek
$15.96
Morph by Jessie Carty
$13.46
LAMBDA LITERARY AWARD WINNER: He Do the Gay Man in Different Voices by Stephen S. Mills
$13.46
Road Work Ahead by Raymond Luczak
$13.46
Butcher's Sugar by Brad Richard
$13.46
ALA Over the Rainbow Title! After This We Go Dark by Theresa Davis
$13.46
How to Kill Poetry by Raymond Luczak
$15.25
Less Fortunate Pirates: Poems from the First Year Without My Father by Bryan Borland
$13.46
Voices Through Skin by Theresa Senato Edwards
$13.46
Nocturnal Omissions by Gavin Geoffrey Dillard and Eric Norris
$12.00
For the Comfort of Automated Phrases by Jane Cassady
$12.00
Heartwrecks by Nicolas Destino
$14.95
The Erotic Postulate by Matthew Hittinger (Alternate Cover 2)
$14.95
Sonics in Warholia by Megan Volpert
$12.00
SOB by Loria Taylor
$14.95
You might also like