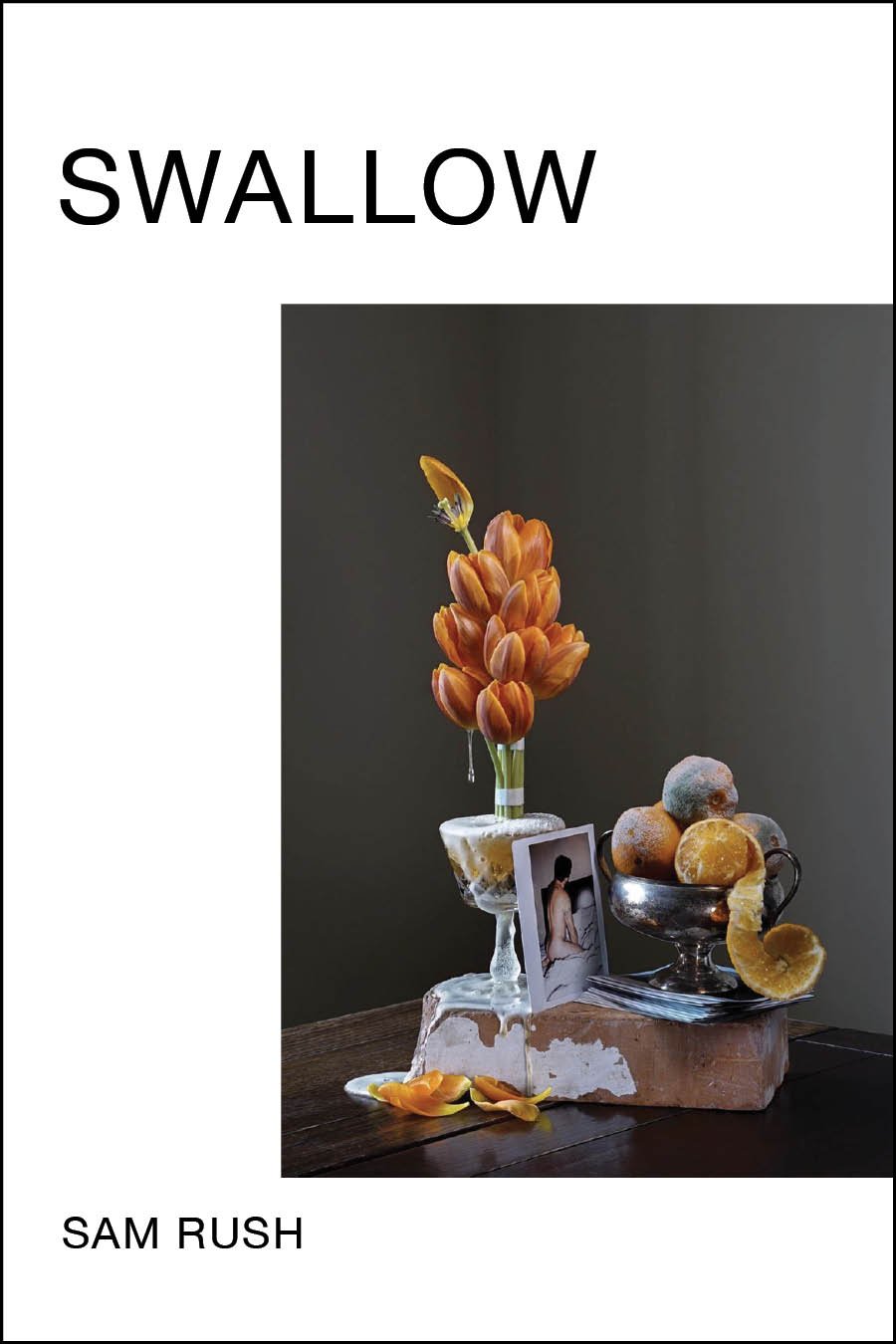 "I want to work in a way that adds to a conversation that is growing around disability poetics and the power that people with disabilities, particularly sensory differences, have to highlight the rift between what is agreed upon as reality and the multiplicities of reality that exist for different individuals. I want to create space for this dissonance to be seen for all it can add to the world. I want us to be much more than our struggles. I want other writers who perceive a reality outside of the accepted version to expand into themselves and out into the world."
PRAISE

“In SWALLOW, Rush sounds off at a new frequency, tuning keenly to the irreducible particularities of a body living its way into a prophecy only certain ears can hear. Ambitious in sonic play and buzzing with the verve of a private hero’s journey, this collection lends gravity to understanding inherited form—the sonnet and one’s own corporeal vessel—as a pyre an altar an altered/state. SWALLOW permits nonlinear passage into the choose-your-own-adventure of dismantling so many false dichotomies—noun vs. verb and sound vs. silence, among them—and Rush proves a skilled captain on all counts.”
—MEG DAY, author of Last Psalm at Sea Level

“Sam Rush’s SWALLOW is an experiment in space, sound, and flight. This debut collection of poetry provides an intimate interrogation of the grief we must learn to live around. A contemporary poet’s ode to the sonnet, SWALLOW uses poetic tradition to build a world of new meaning that rings the page and echoes the ears. A playground and praise song, this collection holds the reader in the contradictions and the comforts of negative space. SWALLOW demands we consider ourselves and the lineage of our losses in ways that fill us whole.”
—PORSHA OLAYIWOLA, Boston poet laureate, author of i shimmer sometimes too

SAM RUSH began writing poems after developing progressive hearing loss and realizing how many words each word could be. Sam was a finalist at the National Poetry Slam as a member of The House Slam team in 2016. Sam’s work has been featured in Muzzle, The Offing, Voicemail Poems & The Journal, as well as on Button Poetry, and SlamFind. They have spent the last decade working in experiential education and youth empowerment and also like plants and things that light up. 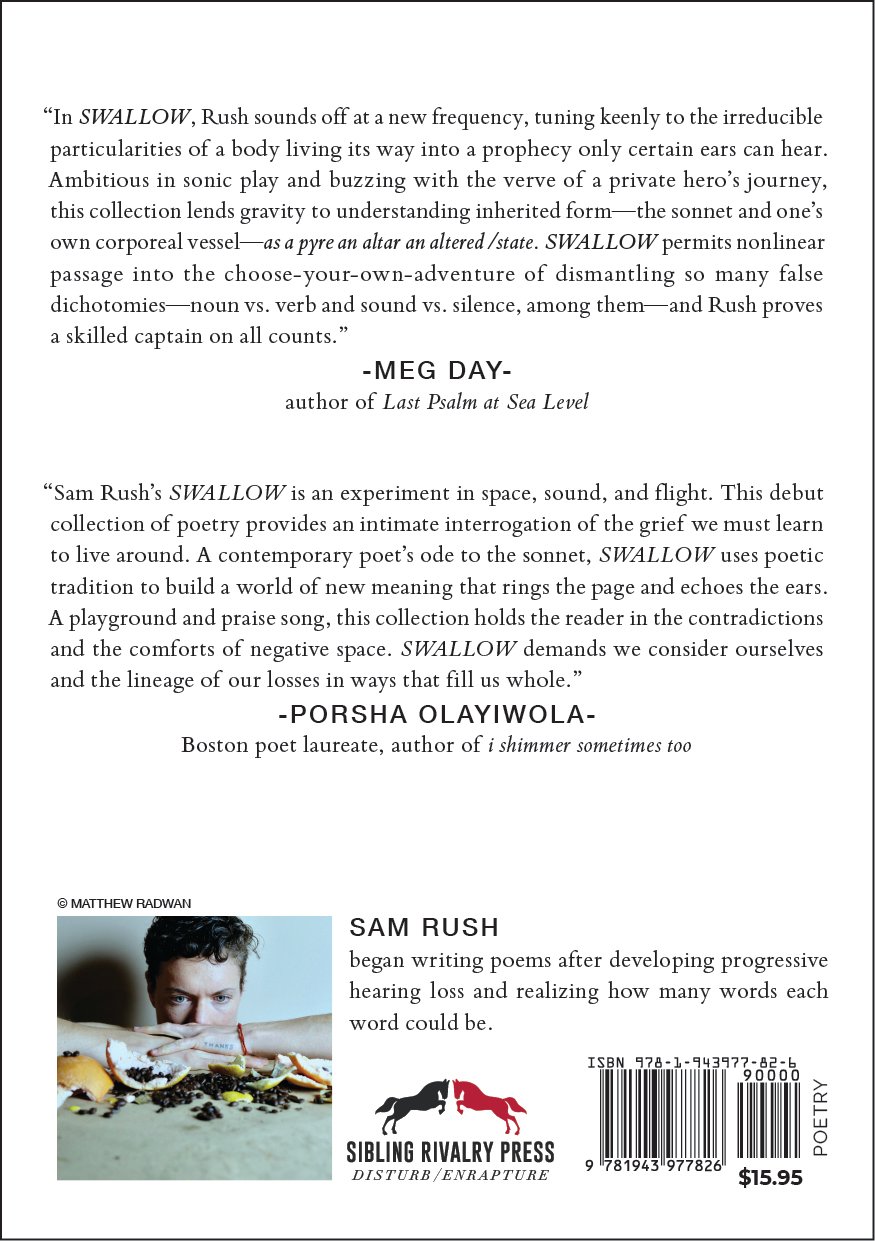 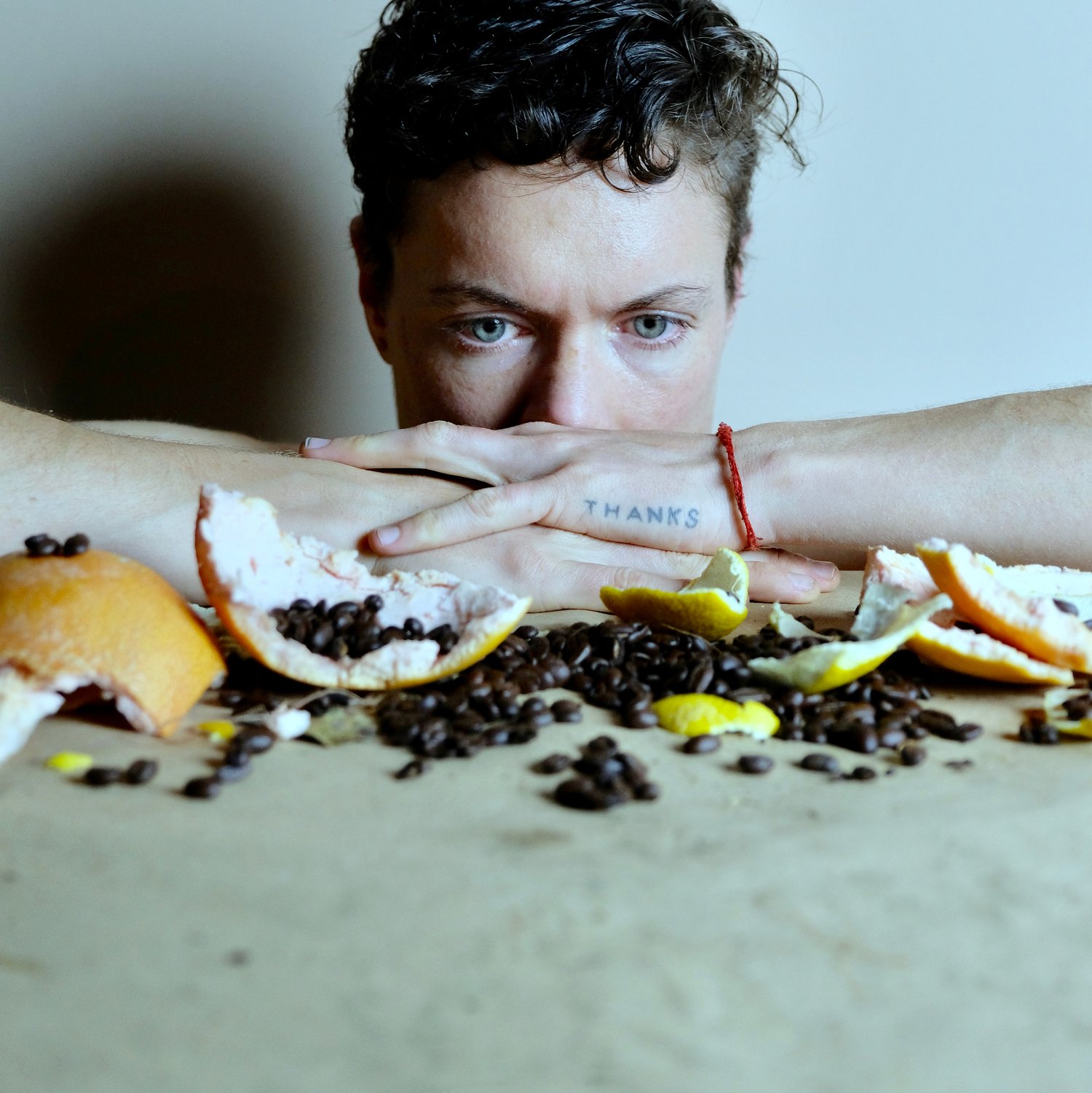 The Moon Over Edgar by Ian Felice
$15.00
More Than Organs by Kay Ulanday Barrett (ALA Stonewall Honor Book/Lammy Finalist)
$18.00
The God of San Francisco by James J. Siegel
$18.00
original kink by Jubi Arriola-Headley
$18.00
So Long, and Thank You for All the Waterproof Mascara. by Lilith Mae McFarlin
$18.00
Slide to Unlock by Julie E. Bloemeke
$18.00
Connor & Seal by Jee Leong Koh
$15.95
Odd Boy by Martin Jude Farawell
$18.00
Have You Seen This Man? The Castro Poems of Karl Tierney
$18.00
Incandescent by Kai Coggin
$18.00
Boss Broad by Megan Volpert, Georgia Author of the Year Award Winner
$19.95
Inclined to Riot by KMA Sullivan
$15.95
The Uninhabitable by Jesse Rice-Evans
$15.95
Black Dog Drinking from an Outdoor Pool by Zach Ozma
$18.00
Anyone Will Tell You by Wendy Chin-Tanner
$15.95
WWJD and Other Poems by Savannah Sipple
$15.95
Othered by Randi M. Romo (ALA Top Five Favorite!)
$18.00
Sister by Nickole Brown
$19.95
Midnight in a Perfect World by Collin Kelley
$15.00
Not Everything Thrown Starts a Revolution by Stephen S. Mills
$18.00
We Go Seasonal by Robert Siek
$18.00
Marianna's Beauty Salon by Bushra Rehman
$14.95
Inside/Out by Joseph Osmundson
$17.00 — Sold out
Prayers for My 17th Chromosome by Amir Rabiyah (Publishing Triangle Finalist)
$14.95
DIG by Bryan Borland (Stillhouse Press/George Mason University)
$17.00 — Sold out
The Carnival of Affection by Philip F. Clark
$14.95
Killing Summer by Sarah Browning
$14.95
Anthem for the Wounded by M.A. Vizsolyi
$14.95
Colin Is Changing His Name by John Andrews
$14.95
LAMBDA WINNER! Mysterious Acts by My People by Valerie Wetlaufer
$14.95
Drowned: A Mermaid's Manifesto by Theresa Davis
$14.95
Having a Coke with Godzilla by Kazumi Chin
$14.95
A House Made of Water by Michelle Lin
$14.95
Ache by Joseph Ross
$16.95
War Poet by Rob Jacques
$16.95
Avowed by Julie R. Enszer
$14.95
DNA Hymn by Annah Anti-Palindrome
$17.00
A(Live) Heart by Imani Sims
$12.00
The Dozen by Casey Rocheteau
$14.95
Lambda Finalist/ALA Over the Rainbow Title! Teaching a Man to Unstick His Tail by Ralph Hamilton
$12.00
When I Was a Twin by Michael Klein
$14.95
ALA Over the Rainbow Title! Call Me by My Other Name by Valerie Wetlaufer
$14.95
Ark by Ed Madden
$14.95
Mother May I by Tina Parker
$14.95
ALA Over the Rainbow Title! Running for Trap Doors by Joanna Hoffman
$14.95
Skin Shift by Matthew Hittinger
$12.00
ALA Over the Rainbow Title! City of Starlings by Daniel Nathan Terry
$14.95
Inheritance by Steven Reigns
$14.95
ALA Over the Rainbow Title! Erebus by Jane Summer
$24.95
Turn by Wendy Chin-Tanner
$14.95
ALA Over the Rainbow Title! The Café of Our Departure by Priscilla Atkins
$14.95
From the Belly by Virginia Bell
$14.95
ALA Over the Rainbow Title! A History of the Unmarried by Stephen S. Mills
$14.95
ALA Over the Rainbow Title! The God of Longing by Brent Calderwood
$14.95
ALA Over the Rainbow Title! The Erotic Postulate by Matthew Hittinger (Original Cover)
$14.95
The Erotic Postulate by Matthew Hittinger (Alternate Cover 3)
$14.95
Only Ride by Megan Volpert
$14.95
ALA Over the Rainbow Title! My Life as Adam by Bryan Borland
$12.00
ALA Over the Rainbow Title! Render by Collin Kelley
$14.95
*LAMBDA & THOM GUNN FINALIST* The Talking Day by Michael Klein
$14.95
Contemplative Man by Brock Guthrie
$14.95
Boys have been . . . by Christopher Gaskins
$14.95
Sisterhood by Julie R. Enszer
$14.95
Purpose and Devil Piss by Robert Siek
$15.96
Morph by Jessie Carty
$13.46
LAMBDA LITERARY AWARD WINNER: He Do the Gay Man in Different Voices by Stephen S. Mills
$13.46
Road Work Ahead by Raymond Luczak
$13.46
Butcher's Sugar by Brad Richard
$13.46
ALA Over the Rainbow Title! After This We Go Dark by Theresa Davis
$13.46
How to Kill Poetry by Raymond Luczak
$15.25
Less Fortunate Pirates: Poems from the First Year Without My Father by Bryan Borland
$13.46
Voices Through Skin by Theresa Senato Edwards
$13.46
Nocturnal Omissions by Gavin Geoffrey Dillard and Eric Norris
$12.00
For the Comfort of Automated Phrases by Jane Cassady
$12.00
Heartwrecks by Nicolas Destino
$14.95
The Erotic Postulate by Matthew Hittinger (Alternate Cover 2)
$14.95
Sonics in Warholia by Megan Volpert
$12.00
SOB by Loria Taylor
$14.95
You might also like