The God of San Francisco by James J. Siegel

In The God of San Francisco, James J. Siegel examines queer grief during the onset of the AIDS crisis through a lavender-and-leather pantheon: St. Christopher, Allah, and the God of San Francisco transubstantiate a sarcoma’s cicatrix into sequins, a viral dowry into a benevolent plume of dazzling feathers. From Laramie, Wyoming, to Toledo, Ohio, Siegel performs a magisterial frilling of historical attention, always emerging as “an extraordinary conflagration. A beautiful immolation.” At once an elegiac columbarium and search-and-rescue map for future bliss, The God of San Francisco trills from the Castro Funeral Home to North Beach and back, surmising death as something honeyed and lissome, “eulogies eulogized.” Desire masquerades as “a raven gliding / on the backdrop of midnight” and “Jesus in fishnets, / crossdressing his way through Nazareth,” and desire cedes each poem’s boy, spectral or otherwise, a warm hand, green grass, “the sun’s rays on our skin.”
PRAISE

"James Siegel’s The God of San Francisco is one man’s spiritual journey through a city marked by violence, queer history, and the legacy of AIDS. Nothing escapes his attention, not the vanished Castro Funeral Home, not the “pale, bony torsos” sunning in Dolores Park. Here, history is a landscape where loss meets redemption. Ultimately, Siegel’s keen eye renders the sometimes painful, hard-fought ways we travel far from where we begin; these poems are as vivid and heartfelt as the world they map."
—Bruce Snider, author of Fruit and Paradise, Indiana

"The first time I met James Siegel I went to his reading series. I was curious because we hadn't met and I know many of the poets in San Francisco. We're reasonably close neighbors, in a place where some no longer think that there are such things as neighbors. The reading was impressive, as is the poet. Having now read The God of San Francisco I wonder if we aren't differently aged versions of a similar child. James Siegel's poems made me cry in deep and healing sobs and in a rhythm of clicking heels and rosaries. My family has lived for five generations in the Castro and I'm a bit possessive of those streets, but Siegel's clean, accessible and loving translations of spaces to words made me feel at home. This collection goes far beyond the rainbow crosswalks and renamed businesses. This should be required reading for people who think they know."
—Kim Shuck, 7th Poet Laureate of San Francisco

"James Siegel’s The God of San Francisco reminds us that 'this is where life ended/ but went on for those left behind'—a post-apocalyptic universe like HBO’s The Leftovers where one person’s heaven is another person’s hell. I am reminded of being a young, queer Latinx boy who dreamt of living in San Francisco, a city whose cultural and political history is entwined in the daily lives of its people. These poems are about a poet’s love for a city whose mythology continues to live. We tread survivor’s guilt, communal history, and its trauma, yes, but these are love poems. The God of San Francisco is Siegel’s love story of a city and its people."
—Ruben Quesada, author of Revelations

James J. Siegel is a San Francisco-based poet and literary arts organizer. He is the host and curator of the popular monthly Literary Speakeasy show at Martuni’s piano bar. Originally from Toledo, Ohio, his first poetry collection, How Ghosts Travel, was inspired and fueled by his coming of age in the Midwest and was a finalist for an Ohioana Book Award. He was a scholarship recipient to the Antioch Writers’ Workshop in Yellow Springs, Ohio, and his poems have been featured in a number of journals including The Cortland Review, Borderlands: Texas Poetry Review, Assaracus, The Fourth River, HIV Here & Now, The Good Men Project, and more. He was also featured in the anthology Divining Divas: 100 Gay Men On Their Muses. 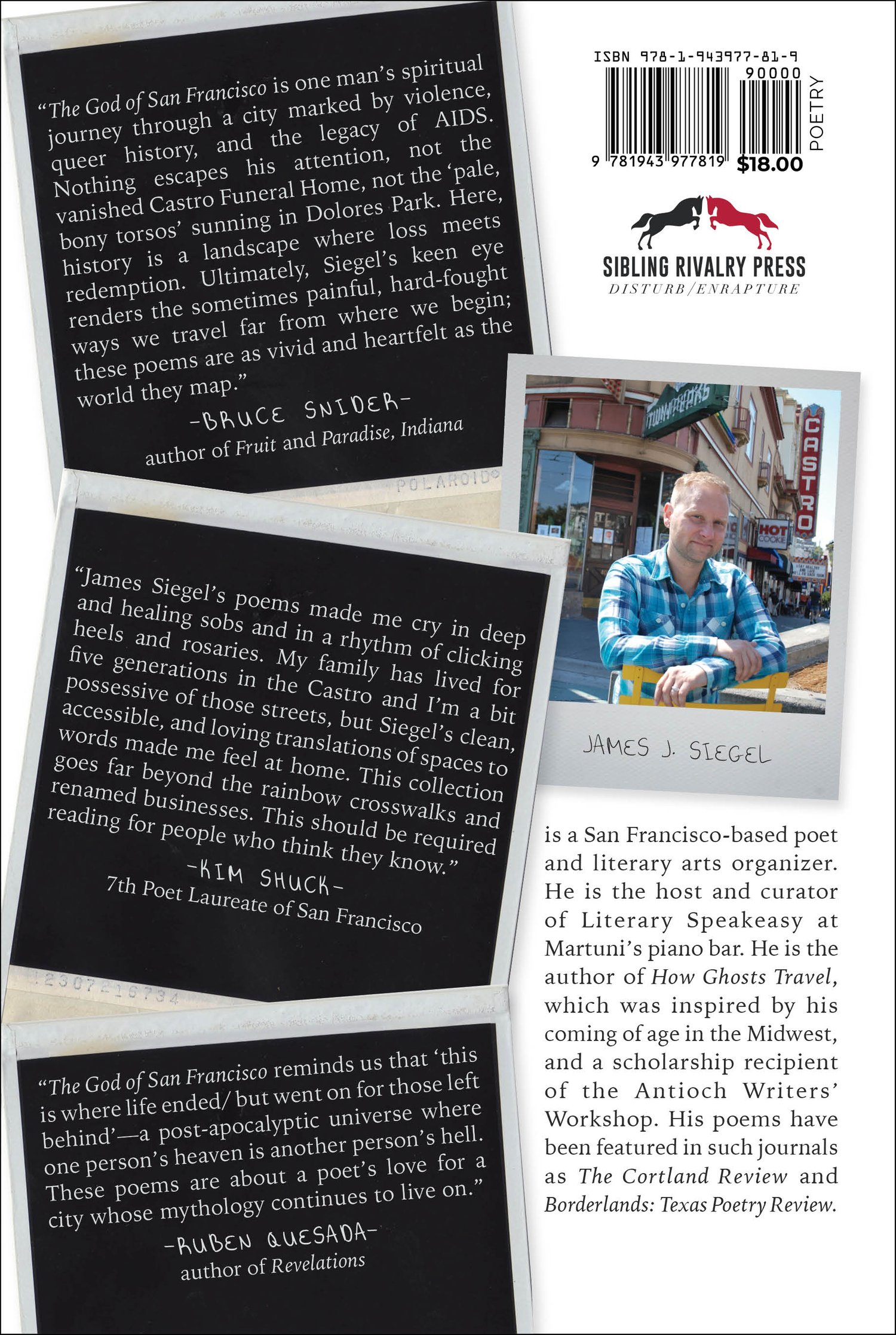 The Moon Over Edgar by Ian Felice
$15.00
SWALLOW by Sam Rush
$15.95
More Than Organs by Kay Ulanday Barrett (ALA Stonewall Honor Book/Lammy Finalist)
$18.00
original kink by Jubi Arriola-Headley
$18.00
So Long, and Thank You for All the Waterproof Mascara. by Lilith Mae McFarlin
$18.00
Slide to Unlock by Julie E. Bloemeke
$18.00
Connor & Seal by Jee Leong Koh
$15.95
Odd Boy by Martin Jude Farawell
$18.00
Have You Seen This Man? The Castro Poems of Karl Tierney
$18.00
Incandescent by Kai Coggin
$18.00
Boss Broad by Megan Volpert, Georgia Author of the Year Award Winner
$19.95
Inclined to Riot by KMA Sullivan
$15.95
The Uninhabitable by Jesse Rice-Evans
$15.95
Black Dog Drinking from an Outdoor Pool by Zach Ozma
$18.00
Anyone Will Tell You by Wendy Chin-Tanner
$15.95
WWJD and Other Poems by Savannah Sipple
$15.95
Othered by Randi M. Romo (ALA Top Five Favorite!)
$18.00
Sister by Nickole Brown
$19.95
Midnight in a Perfect World by Collin Kelley
$15.00
Not Everything Thrown Starts a Revolution by Stephen S. Mills
$18.00
We Go Seasonal by Robert Siek
$18.00
Marianna's Beauty Salon by Bushra Rehman
$14.95
Inside/Out by Joseph Osmundson
$17.00 — Sold out
Prayers for My 17th Chromosome by Amir Rabiyah (Publishing Triangle Finalist)
$14.95
DIG by Bryan Borland (Stillhouse Press/George Mason University)
$17.00 — Sold out
The Carnival of Affection by Philip F. Clark
$14.95
Killing Summer by Sarah Browning
$14.95
Anthem for the Wounded by M.A. Vizsolyi
$14.95
Colin Is Changing His Name by John Andrews
$14.95
LAMBDA WINNER! Mysterious Acts by My People by Valerie Wetlaufer
$14.95
Drowned: A Mermaid's Manifesto by Theresa Davis
$14.95
Having a Coke with Godzilla by Kazumi Chin
$14.95
A House Made of Water by Michelle Lin
$14.95
Ache by Joseph Ross
$16.95
War Poet by Rob Jacques
$16.95
Avowed by Julie R. Enszer
$14.95
DNA Hymn by Annah Anti-Palindrome
$17.00
A(Live) Heart by Imani Sims
$12.00
The Dozen by Casey Rocheteau
$14.95
Lambda Finalist/ALA Over the Rainbow Title! Teaching a Man to Unstick His Tail by Ralph Hamilton
$12.00
When I Was a Twin by Michael Klein
$14.95
ALA Over the Rainbow Title! Call Me by My Other Name by Valerie Wetlaufer
$14.95
Ark by Ed Madden
$14.95
Mother May I by Tina Parker
$14.95
ALA Over the Rainbow Title! Running for Trap Doors by Joanna Hoffman
$14.95
Skin Shift by Matthew Hittinger
$12.00
ALA Over the Rainbow Title! City of Starlings by Daniel Nathan Terry
$14.95
Inheritance by Steven Reigns
$14.95
ALA Over the Rainbow Title! Erebus by Jane Summer
$24.95
Turn by Wendy Chin-Tanner
$14.95
ALA Over the Rainbow Title! The Café of Our Departure by Priscilla Atkins
$14.95
From the Belly by Virginia Bell
$14.95
ALA Over the Rainbow Title! A History of the Unmarried by Stephen S. Mills
$14.95
ALA Over the Rainbow Title! The God of Longing by Brent Calderwood
$14.95
ALA Over the Rainbow Title! The Erotic Postulate by Matthew Hittinger (Original Cover)
$14.95
The Erotic Postulate by Matthew Hittinger (Alternate Cover 3)
$14.95
Only Ride by Megan Volpert
$14.95
ALA Over the Rainbow Title! My Life as Adam by Bryan Borland
$12.00
ALA Over the Rainbow Title! Render by Collin Kelley
$14.95
*LAMBDA & THOM GUNN FINALIST* The Talking Day by Michael Klein
$14.95
Contemplative Man by Brock Guthrie
$14.95
Boys have been . . . by Christopher Gaskins
$14.95
Sisterhood by Julie R. Enszer
$14.95
Purpose and Devil Piss by Robert Siek
$15.96
Morph by Jessie Carty
$13.46
LAMBDA LITERARY AWARD WINNER: He Do the Gay Man in Different Voices by Stephen S. Mills
$13.46
Road Work Ahead by Raymond Luczak
$13.46
Butcher's Sugar by Brad Richard
$13.46
ALA Over the Rainbow Title! After This We Go Dark by Theresa Davis
$13.46
How to Kill Poetry by Raymond Luczak
$15.25
Less Fortunate Pirates: Poems from the First Year Without My Father by Bryan Borland
$13.46
Voices Through Skin by Theresa Senato Edwards
$13.46
Nocturnal Omissions by Gavin Geoffrey Dillard and Eric Norris
$12.00
For the Comfort of Automated Phrases by Jane Cassady
$12.00
Heartwrecks by Nicolas Destino
$14.95
The Erotic Postulate by Matthew Hittinger (Alternate Cover 2)
$14.95
Sonics in Warholia by Megan Volpert
$12.00
SOB by Loria Taylor
$14.95
You might also like