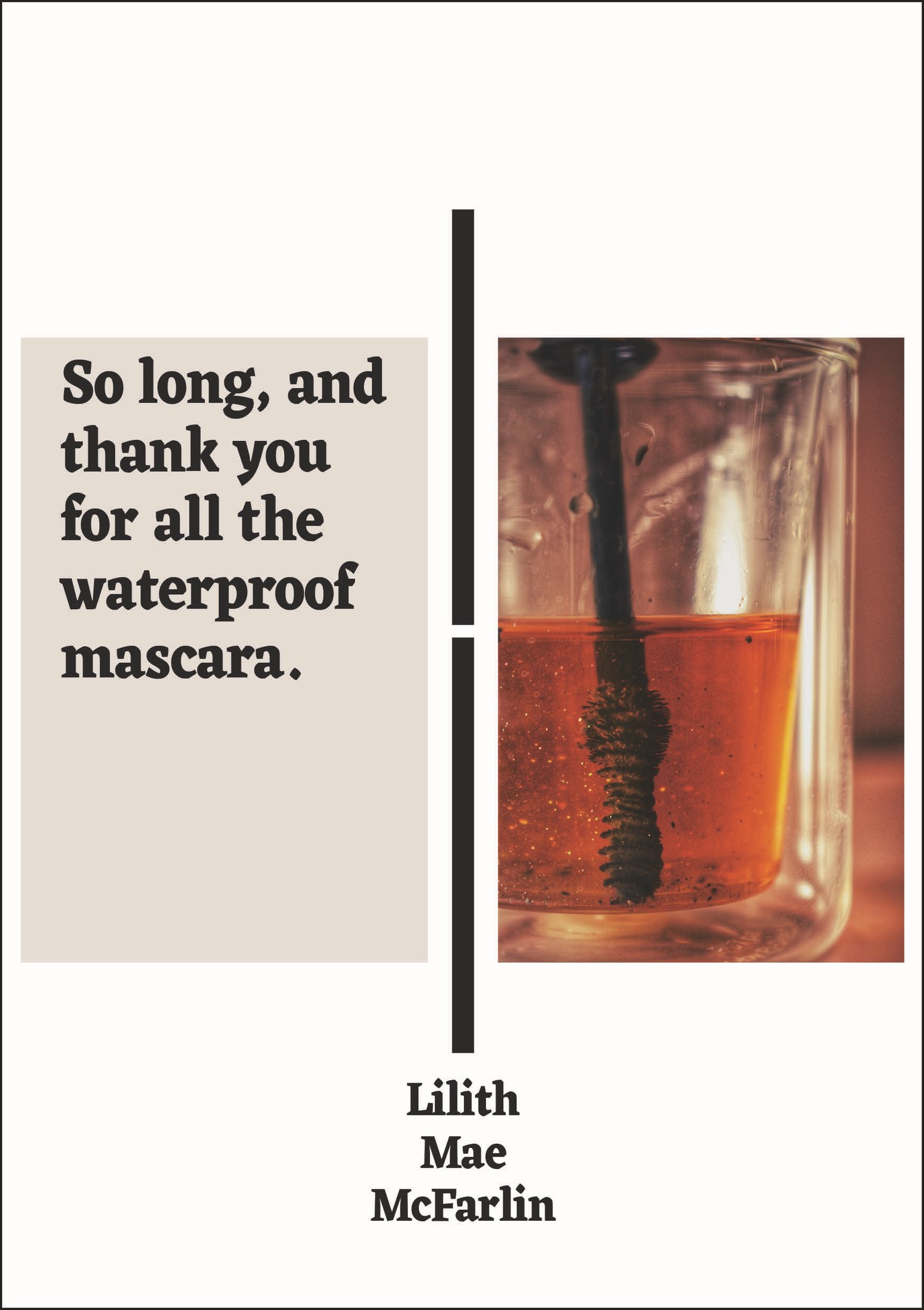 So Long, and Thank You for All the Waterproof Mascara. by Lilith Mae McFarlin

---
PRAISE FOR
SO LONG, AND THANKS FOR ALL THE WATERPROOF MASCARA.

“Lilith Mae McFarlin’s So Long, and Thank You for All the Waterproof Mascara is a tour de force exploration of gender and sexuality—the artifice, the performative, and the genuine. These poems fearlessly punch back at our cruel political and cultural moment. In bold gestures, crisp imagery, and laugh-out-loud reversals that might make a reader’s mascara run, McFarlin invites us into her ‘penthouse level of unapologetic queerness.’”

- Denise Duhamel, author of Blowout
“I met Lilith Mae McFarlin about a half a dozen years ago at the Live From the Back Room Reading series. She had the quiet, almost withdrawn attitude that might have led you to believe she was shy. Nothing could have been farther from the truth. She is both funny and angry, a sort of Schrödinger’s punk rock poet, and her poetry reflects the complexity of her experience. Her sense of humor might best be understood if I told you about the Bukowski reading I hosted where she read instead Spice Girl lyrics. Her depth obvious in poems like 'I Don’t Have a Problem,' a poem that goes on to say ‘with straight people as long as they’re not flamboyant.’ Ironic, thought provoking poetry in a Twitter world, who’d have thought. 'I Wanna Punch the World in the Dick' is as outlaw as a rent by the week trailer with a trash can full of cold medicine boxes out back. Full of vanity, I think I could have written it myself. Good poetry has a way of doing that to a person. Flipping expectations on their head, 'Batman Comes on Television' touched me, moved me deeply in a way that would pale in the brevity called for, you must read it. It turned my heart inside out. I could not help but be moved by meeting and hearing Lilith Mae McFarlin share her words and work. More so, as I held her written words in my hands. She does what the greatest poets do, she invites us in, for a moment we share hearts and thoughts. This is a book that should be bought and read again and again.”
- Justin Booth, author of The Luckiest Man
---

Lilith Mae McFarlin lives in North Little Rock, Arkansas, with her parrot, Polly. She works in a public library and enjoys playing the banjo while complaining about the patriarchy. 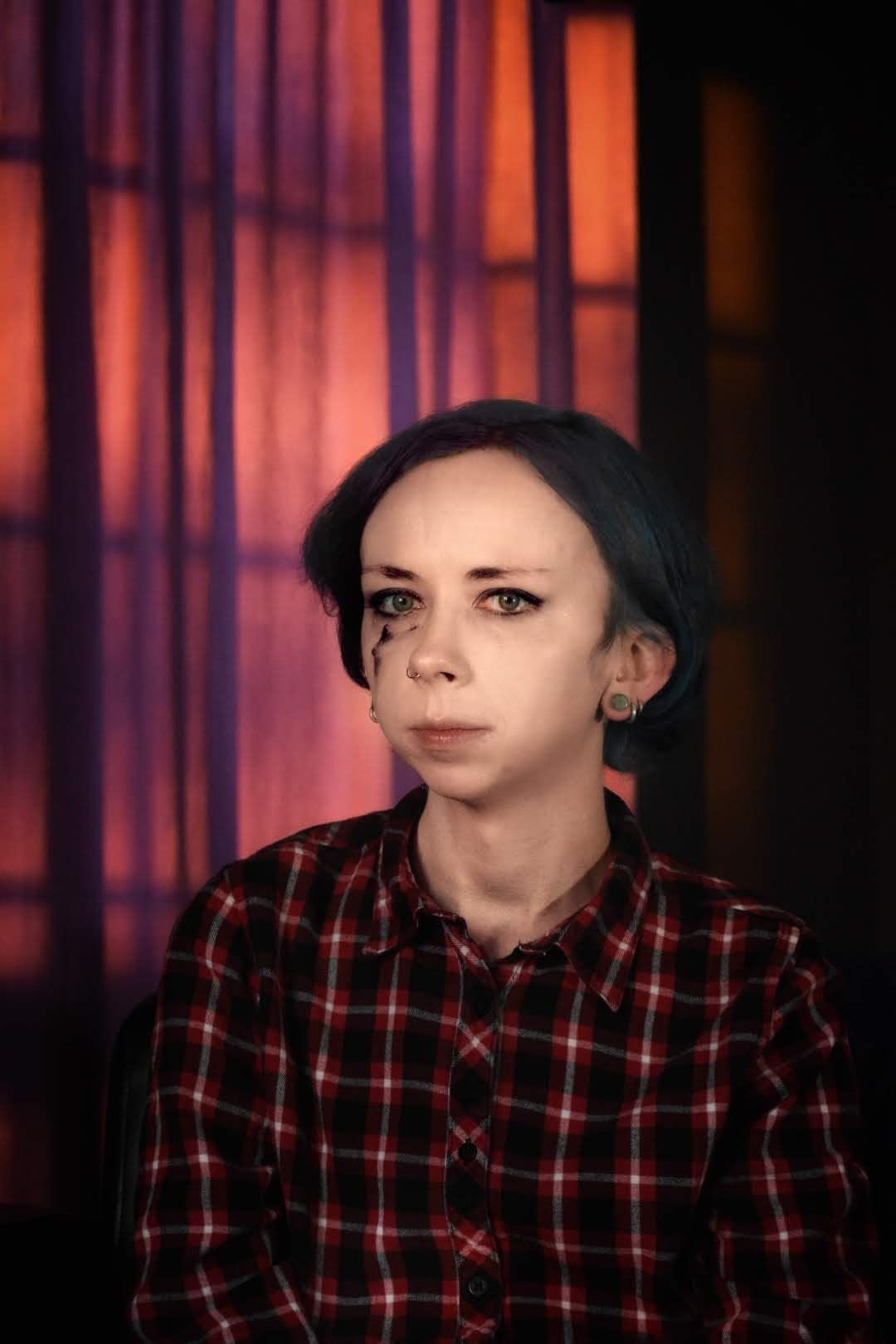 The Moon Over Edgar by Ian Felice
$15.00
SWALLOW by Sam Rush
$15.95
More Than Organs by Kay Ulanday Barrett (ALA Stonewall Honor Book/Lammy Finalist)
$18.00
The God of San Francisco by James J. Siegel
$18.00
original kink by Jubi Arriola-Headley
$18.00
Slide to Unlock by Julie E. Bloemeke
$18.00
Connor & Seal by Jee Leong Koh
$15.95
Odd Boy by Martin Jude Farawell
$18.00
Have You Seen This Man? The Castro Poems of Karl Tierney
$18.00
Incandescent by Kai Coggin
$18.00
Boss Broad by Megan Volpert, Georgia Author of the Year Award Winner
$19.95
Inclined to Riot by KMA Sullivan
$15.95
The Uninhabitable by Jesse Rice-Evans
$15.95
Black Dog Drinking from an Outdoor Pool by Zach Ozma
$18.00
Anyone Will Tell You by Wendy Chin-Tanner
$15.95
WWJD and Other Poems by Savannah Sipple
$15.95
Othered by Randi M. Romo (ALA Top Five Favorite!)
$18.00
Sister by Nickole Brown
$19.95
Midnight in a Perfect World by Collin Kelley
$15.00
Not Everything Thrown Starts a Revolution by Stephen S. Mills
$18.00
We Go Seasonal by Robert Siek
$18.00
Marianna's Beauty Salon by Bushra Rehman
$14.95
Inside/Out by Joseph Osmundson
$17.00 — Sold out
Prayers for My 17th Chromosome by Amir Rabiyah (Publishing Triangle Finalist)
$14.95
DIG by Bryan Borland (Stillhouse Press/George Mason University)
$17.00 — Sold out
The Carnival of Affection by Philip F. Clark
$14.95
Killing Summer by Sarah Browning
$14.95
Anthem for the Wounded by M.A. Vizsolyi
$14.95
Colin Is Changing His Name by John Andrews
$14.95
LAMBDA WINNER! Mysterious Acts by My People by Valerie Wetlaufer
$14.95
Drowned: A Mermaid's Manifesto by Theresa Davis
$14.95
Having a Coke with Godzilla by Kazumi Chin
$14.95
A House Made of Water by Michelle Lin
$14.95
Ache by Joseph Ross
$16.95
War Poet by Rob Jacques
$16.95
Avowed by Julie R. Enszer
$14.95
DNA Hymn by Annah Anti-Palindrome
$17.00
A(Live) Heart by Imani Sims
$12.00
The Dozen by Casey Rocheteau
$14.95
Lambda Finalist/ALA Over the Rainbow Title! Teaching a Man to Unstick His Tail by Ralph Hamilton
$12.00
When I Was a Twin by Michael Klein
$14.95
ALA Over the Rainbow Title! Call Me by My Other Name by Valerie Wetlaufer
$14.95
Ark by Ed Madden
$14.95
Mother May I by Tina Parker
$14.95
ALA Over the Rainbow Title! Running for Trap Doors by Joanna Hoffman
$14.95
Skin Shift by Matthew Hittinger
$12.00
ALA Over the Rainbow Title! City of Starlings by Daniel Nathan Terry
$14.95
Inheritance by Steven Reigns
$14.95
ALA Over the Rainbow Title! Erebus by Jane Summer
$24.95
Turn by Wendy Chin-Tanner
$14.95
ALA Over the Rainbow Title! The Café of Our Departure by Priscilla Atkins
$14.95
From the Belly by Virginia Bell
$14.95
ALA Over the Rainbow Title! A History of the Unmarried by Stephen S. Mills
$14.95
ALA Over the Rainbow Title! The God of Longing by Brent Calderwood
$14.95
ALA Over the Rainbow Title! The Erotic Postulate by Matthew Hittinger (Original Cover)
$14.95
The Erotic Postulate by Matthew Hittinger (Alternate Cover 3)
$14.95
Only Ride by Megan Volpert
$14.95
ALA Over the Rainbow Title! My Life as Adam by Bryan Borland
$12.00
ALA Over the Rainbow Title! Render by Collin Kelley
$14.95
*LAMBDA & THOM GUNN FINALIST* The Talking Day by Michael Klein
$14.95
Contemplative Man by Brock Guthrie
$14.95
Boys have been . . . by Christopher Gaskins
$14.95
Sisterhood by Julie R. Enszer
$14.95
Purpose and Devil Piss by Robert Siek
$15.96
Morph by Jessie Carty
$13.46
LAMBDA LITERARY AWARD WINNER: He Do the Gay Man in Different Voices by Stephen S. Mills
$13.46
Road Work Ahead by Raymond Luczak
$13.46
Butcher's Sugar by Brad Richard
$13.46
ALA Over the Rainbow Title! After This We Go Dark by Theresa Davis
$13.46
How to Kill Poetry by Raymond Luczak
$15.25
Less Fortunate Pirates: Poems from the First Year Without My Father by Bryan Borland
$13.46
Voices Through Skin by Theresa Senato Edwards
$13.46
Nocturnal Omissions by Gavin Geoffrey Dillard and Eric Norris
$12.00
For the Comfort of Automated Phrases by Jane Cassady
$12.00
Heartwrecks by Nicolas Destino
$14.95
The Erotic Postulate by Matthew Hittinger (Alternate Cover 2)
$14.95
Sonics in Warholia by Megan Volpert
$12.00
SOB by Loria Taylor
$14.95
You might also like