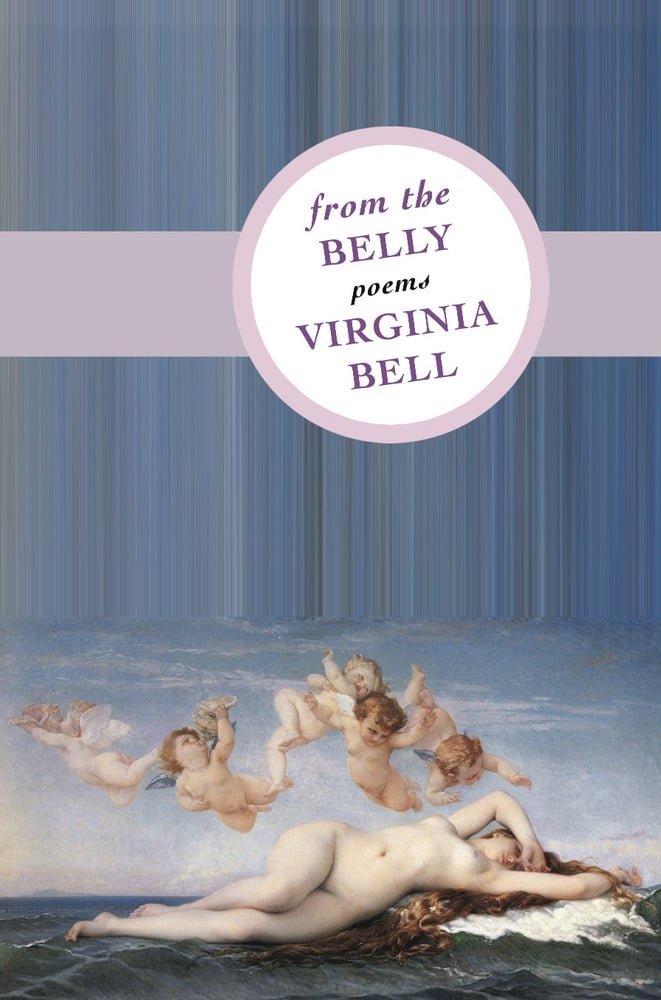 From the Belly by Virginia Bell

In From the Belly, Virginia Bell opens the doors to a gallery of poetic meditations – on the tenderness of childhood and motherhood, the primal pleasures of food and sex, and the joyful aches of family and memory. The poems are by turns ekphrastic and self-consciously confessional, taking inspiration from the art of everyday things.

Virginia Bell’s poetry has appeared in CALYX, a Journal of Art and Literature by Women, The Mom Egg, Poet Lore, Pebble Lake Review, Wicked Alice, Ekphrasis, Contrary Magazine, Woman Made Gallery’s Her Mark: a Journal of Art and Poetry, and Beltway Poetry Quarterly, as well as in the anthologies Brute Neighbors: Urban Nature Poetry, Prose and Photography and A Writers’ Congress: Chicago Poets on Barack Obama’s Inauguration. Bell has a Ph.D. in Comparative Literature and has published articles on activist writers such as Eduardo Galeano and Leslie Marmon Silko, and also the Instructor’s Resource Manual for Beyond Borders: A Cultural Reader (Houghton Mifflin 2003). She is an associate editor with RHINO Magazine and an adjunct professor at Loyola University Chicago, where she particularly enjoys teaching courses on Women in Literature and Early American Literature. 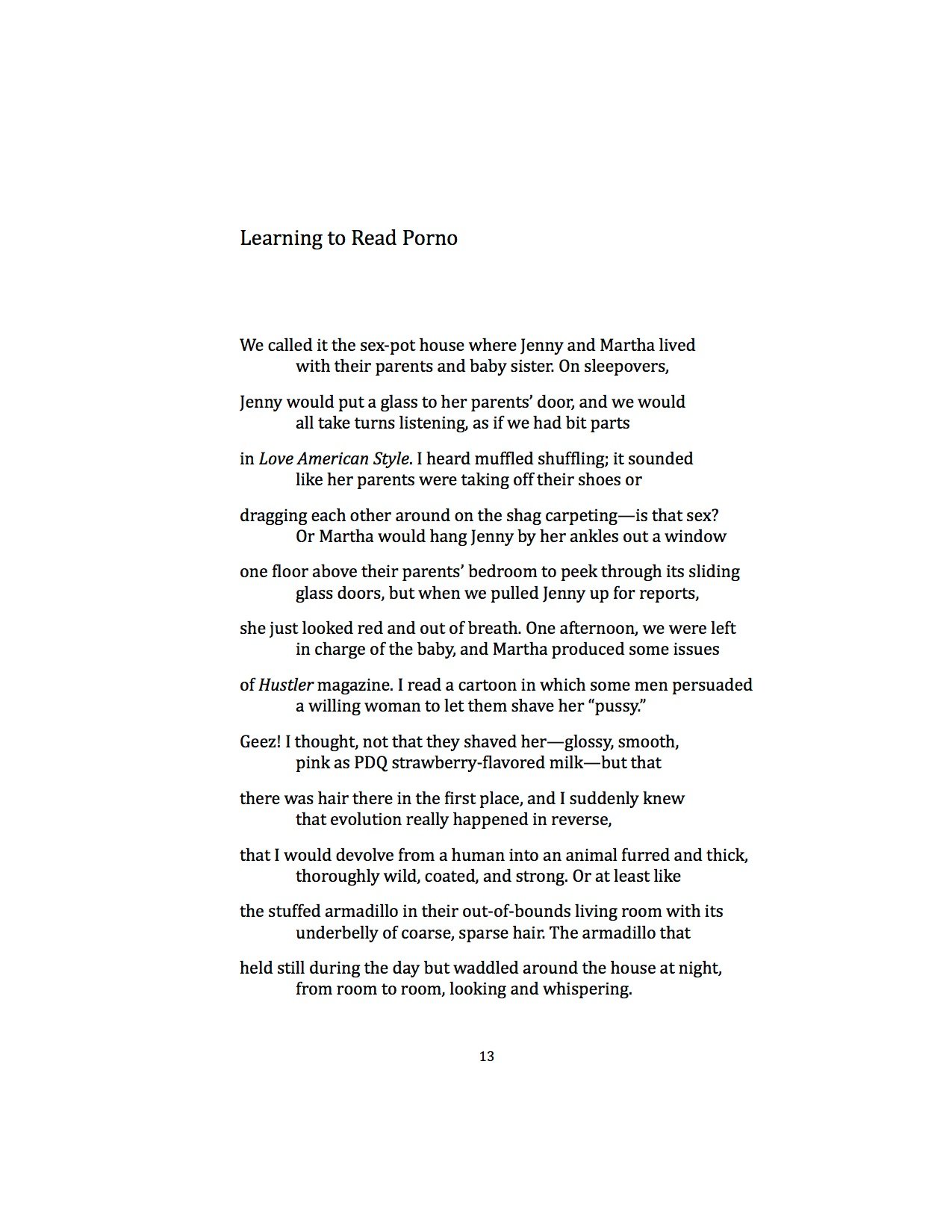 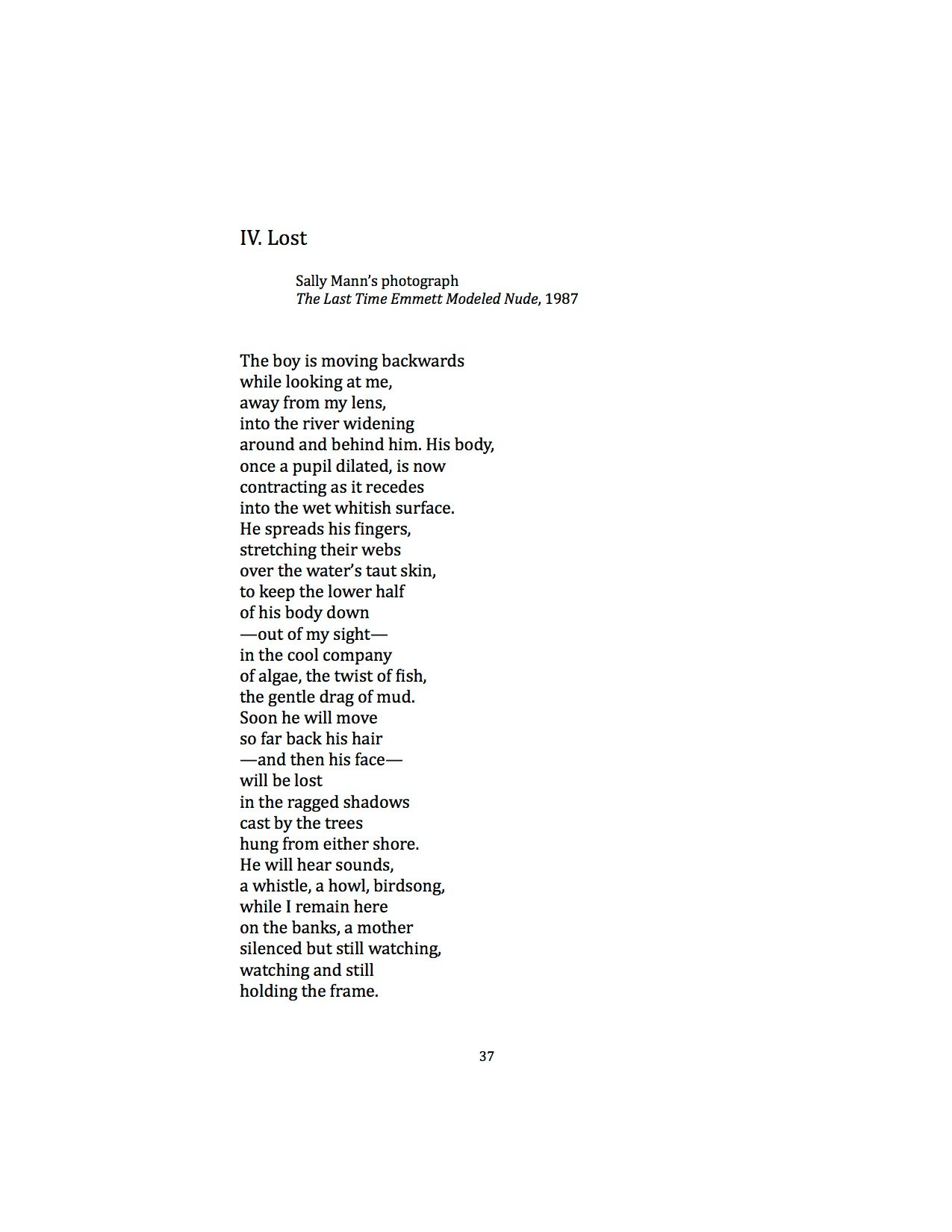 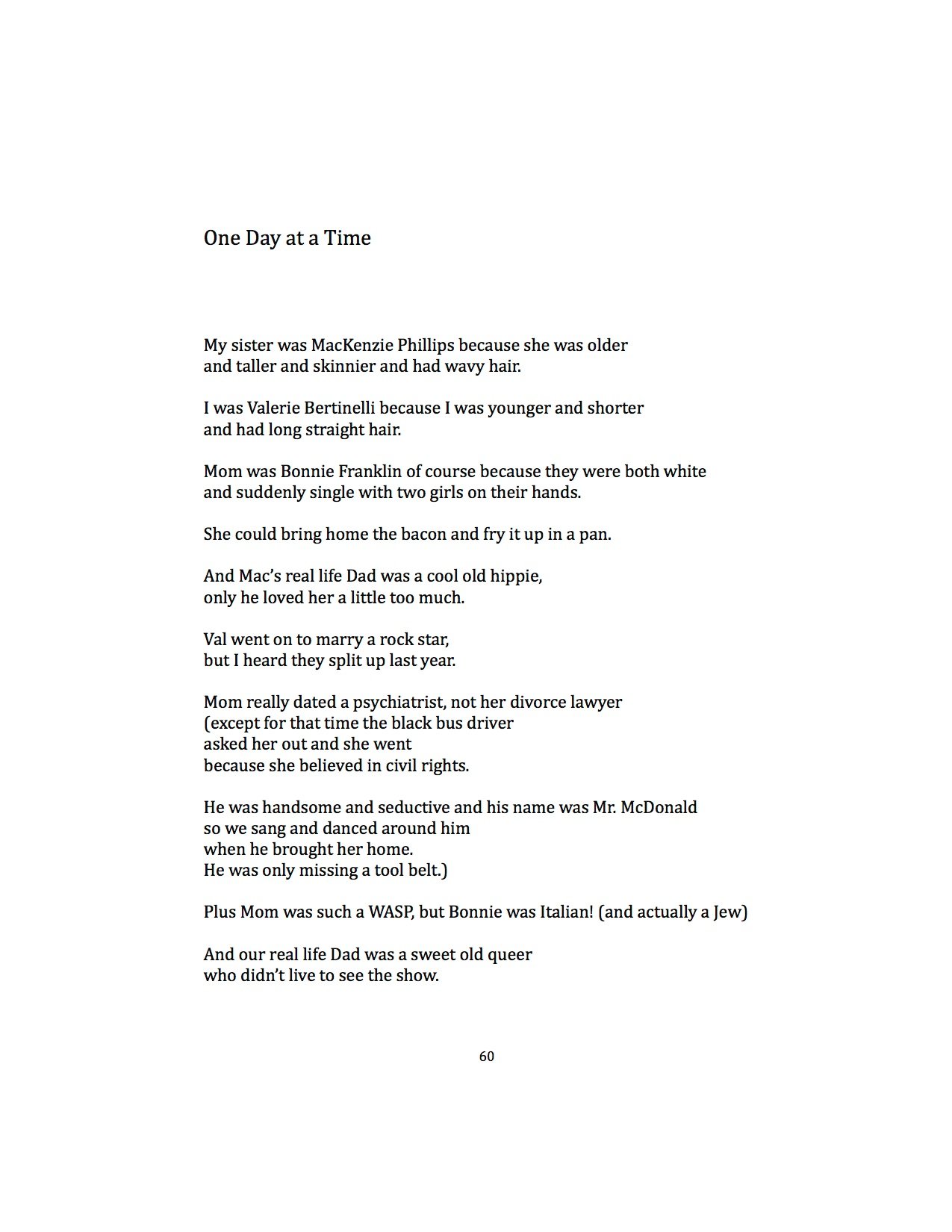 The Moon Over Edgar by Ian Felice
$15.00
SWALLOW by Sam Rush
$15.95
More Than Organs by Kay Ulanday Barrett (ALA Stonewall Honor Book/Lammy Finalist)
$18.00
The God of San Francisco by James J. Siegel
$18.00
original kink by Jubi Arriola-Headley
$18.00
So Long, and Thank You for All the Waterproof Mascara. by Lilith Mae McFarlin
$18.00
Slide to Unlock by Julie E. Bloemeke
$18.00
Connor & Seal by Jee Leong Koh
$15.95
Odd Boy by Martin Jude Farawell
$18.00
Have You Seen This Man? The Castro Poems of Karl Tierney
$18.00
Incandescent by Kai Coggin
$18.00
Boss Broad by Megan Volpert, Georgia Author of the Year Award Winner
$19.95
Inclined to Riot by KMA Sullivan
$15.95
The Uninhabitable by Jesse Rice-Evans
$15.95
Black Dog Drinking from an Outdoor Pool by Zach Ozma
$18.00
Anyone Will Tell You by Wendy Chin-Tanner
$15.95
WWJD and Other Poems by Savannah Sipple
$15.95
Othered by Randi M. Romo (ALA Top Five Favorite!)
$18.00
Sister by Nickole Brown
$19.95
Midnight in a Perfect World by Collin Kelley
$15.00
Not Everything Thrown Starts a Revolution by Stephen S. Mills
$18.00
We Go Seasonal by Robert Siek
$18.00
Marianna's Beauty Salon by Bushra Rehman
$14.95
Inside/Out by Joseph Osmundson
$17.00 — Sold out
Prayers for My 17th Chromosome by Amir Rabiyah (Publishing Triangle Finalist)
$14.95
DIG by Bryan Borland (Stillhouse Press/George Mason University)
$17.00 — Sold out
The Carnival of Affection by Philip F. Clark
$14.95
Killing Summer by Sarah Browning
$14.95
Anthem for the Wounded by M.A. Vizsolyi
$14.95
Colin Is Changing His Name by John Andrews
$14.95
LAMBDA WINNER! Mysterious Acts by My People by Valerie Wetlaufer
$14.95
Drowned: A Mermaid's Manifesto by Theresa Davis
$14.95
Having a Coke with Godzilla by Kazumi Chin
$14.95
A House Made of Water by Michelle Lin
$14.95
Ache by Joseph Ross
$16.95
War Poet by Rob Jacques
$16.95
Avowed by Julie R. Enszer
$14.95
DNA Hymn by Annah Anti-Palindrome
$17.00
A(Live) Heart by Imani Sims
$12.00
The Dozen by Casey Rocheteau
$14.95
Lambda Finalist/ALA Over the Rainbow Title! Teaching a Man to Unstick His Tail by Ralph Hamilton
$12.00
When I Was a Twin by Michael Klein
$14.95
ALA Over the Rainbow Title! Call Me by My Other Name by Valerie Wetlaufer
$14.95
Ark by Ed Madden
$14.95
Mother May I by Tina Parker
$14.95
ALA Over the Rainbow Title! Running for Trap Doors by Joanna Hoffman
$14.95
Skin Shift by Matthew Hittinger
$12.00
ALA Over the Rainbow Title! City of Starlings by Daniel Nathan Terry
$14.95
Inheritance by Steven Reigns
$14.95
ALA Over the Rainbow Title! Erebus by Jane Summer
$24.95
Turn by Wendy Chin-Tanner
$14.95
ALA Over the Rainbow Title! The Café of Our Departure by Priscilla Atkins
$14.95
ALA Over the Rainbow Title! A History of the Unmarried by Stephen S. Mills
$14.95
ALA Over the Rainbow Title! The God of Longing by Brent Calderwood
$14.95
ALA Over the Rainbow Title! The Erotic Postulate by Matthew Hittinger (Original Cover)
$14.95
The Erotic Postulate by Matthew Hittinger (Alternate Cover 3)
$14.95
Only Ride by Megan Volpert
$14.95
ALA Over the Rainbow Title! My Life as Adam by Bryan Borland
$12.00
ALA Over the Rainbow Title! Render by Collin Kelley
$14.95
*LAMBDA & THOM GUNN FINALIST* The Talking Day by Michael Klein
$14.95
Contemplative Man by Brock Guthrie
$14.95
Boys have been . . . by Christopher Gaskins
$14.95
Sisterhood by Julie R. Enszer
$14.95
Purpose and Devil Piss by Robert Siek
$15.96
Morph by Jessie Carty
$13.46
LAMBDA LITERARY AWARD WINNER: He Do the Gay Man in Different Voices by Stephen S. Mills
$13.46
Road Work Ahead by Raymond Luczak
$13.46
Butcher's Sugar by Brad Richard
$13.46
ALA Over the Rainbow Title! After This We Go Dark by Theresa Davis
$13.46
How to Kill Poetry by Raymond Luczak
$15.25
Less Fortunate Pirates: Poems from the First Year Without My Father by Bryan Borland
$13.46
Voices Through Skin by Theresa Senato Edwards
$13.46
Nocturnal Omissions by Gavin Geoffrey Dillard and Eric Norris
$12.00
For the Comfort of Automated Phrases by Jane Cassady
$12.00
Heartwrecks by Nicolas Destino
$14.95
The Erotic Postulate by Matthew Hittinger (Alternate Cover 2)
$14.95
Sonics in Warholia by Megan Volpert
$12.00
SOB by Loria Taylor
$14.95
You might also like