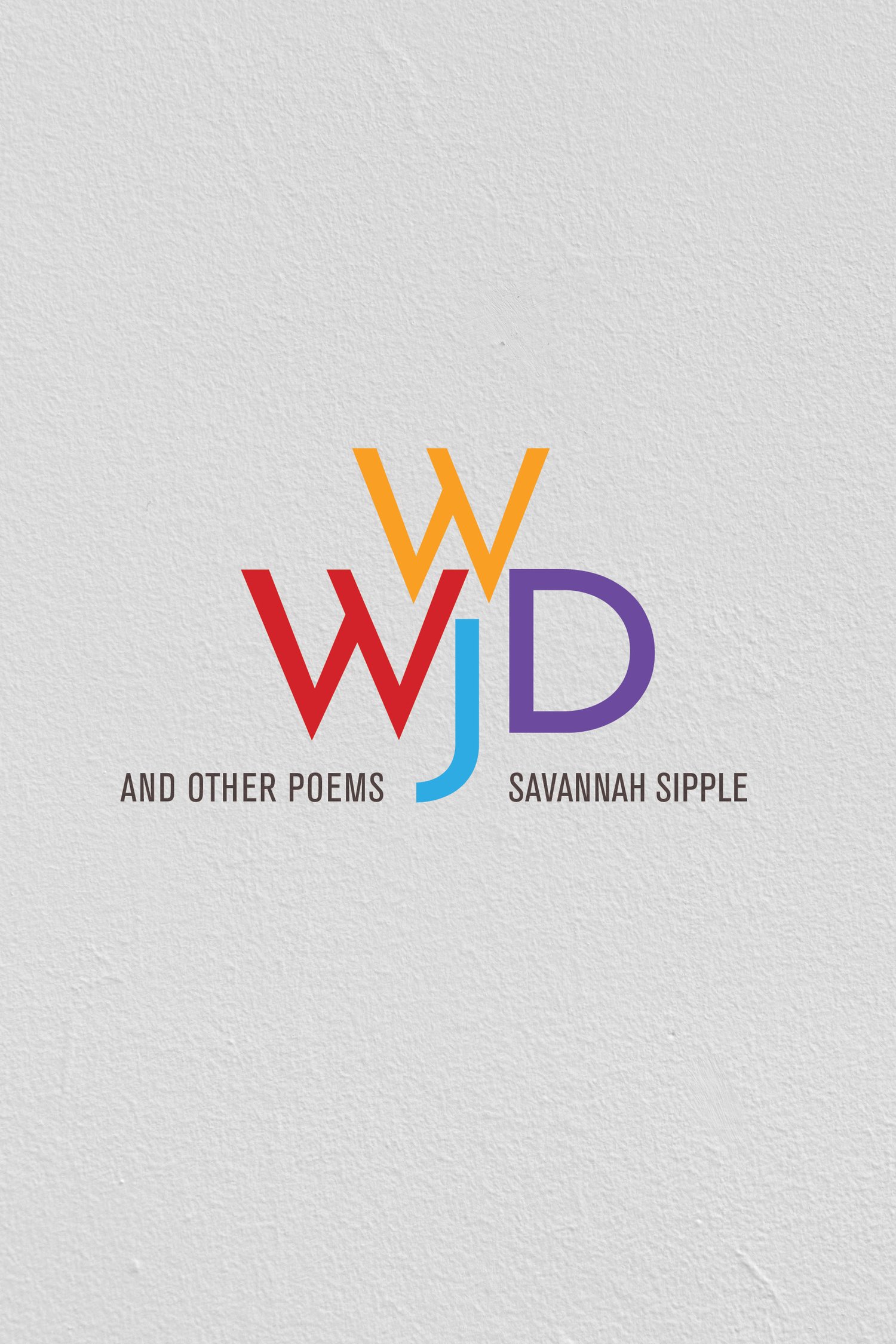 WWJD and Other Poems by Savannah Sipple

Savannah Sipple’s voice is stark and crucial. Her debut poetry collection WWJD and Other Poems explores what it is to be a queer woman in Appalachia and is rooted in its culture and in her body. With a beer-drinking Jesus as her wing man, she navigates this difficult terrain of stereotype, conservative Evangelicalism, and, perhaps most, shame.

SAVANNAH SIPPLE is a writer from east Kentucky. Her poems have recently been published in Appalachian Heritage, Waxwing, Talking River, The Offing, and the Louisville Review. She is also the recipient of grants from the Money for Women/Barbara Deming Memorial Fund and the Kentucky Foundation for Women.

Savannah Sipple is on fire. Unapologetically queer and Appalachian, Sipple will take you to church in these poems, busting open every stereotype along the way. She writes fearlessly about desire, bodies, shame, violence, forgiveness, and self-love, and the poems are fierce, sassy, and aching. Savannah Sipple is a talented, fresh new voice.

Savannah Sipple is the poet we need right now. WWJD is the book we need, in this moment when it feels like the heart and conscience of our nation is being ripped out by the roots. This collection is full of truth and light and so much fierceness it threatens to take flight from our hands while we're reading it, buoyed by the very power of language. This is powerful, important, and brave writing of the highest order.

WWJD and Other Poems is the artful reckoning of a queer woman coming of age in a place and a body she has long "tried to escape." Learn to fish, shoot, and box with this speaker. Play a game of "Evangelism BINGO" and hope to lose. Draft "A List of Times [You] Thought [You] Were Gay" and compare your notes with hers. Take a drive and crash a frank conversation with Jesus. Finally, fall in love--for the first time or all over again: "Her hip a hinge./ Her lips a door." This is a testament to human resilience. This is an arresting and triumphant debut.

—Julie Marie Wade, author of When I Was Straight and Same-Sexy Marriage: A Novella in Poems

Savannah Sipple’s debut is proof of a woman rising—up from the strung-out, Christ-haunted carcinogens and violences of a land stripped of its coal; up from nine-hours on her feet followed by the extra work back home of picking gravel out of pinto beans; up from a return visit to the honey-suckle sweetness of good church folks who whisper "backslider" and "quare." Purging shame with every line, these poems love the Kentucky from which they rise as much as they reject the self-hatred that place instilled in a girl neither thin nor straight, and ultimately (and yes, even miraculously), emerge blatant about desire and body-proud. "I want to be marbled, so that if you were to slice me, you'd know what a good cut I am," Sipple writes. Open this book to any poem to get a taste of exactly what she means.

In the final poem of Savannah Sipple’s debut book, WWJD and Other Poems, Jesus Christ “rides shotgun” with the speaker along dangerous roads, and it’s at this point I feel as if I, too, have been riding shotgun with this speaker as she’s searched for love and acceptance, for being queer, for being fat, for being a woman, in a repressive Evangelical environment, yes, but also for just being an honest-to-God human. The mingling of fear, eros, and outright violence in these poems is handled with that rare combination of vulnerability and tough candor—as well as a laugh-out-loud humor infused with Kentucky idiom. In her epistolary love poems people fuck in truck beds, mark wintergreen Skoal hickeys on each other’s necks, and leave bonfires with leaves in their hair. These poems stick their necks out, and sometimes they get whacked; that’s kinda the point, isn’t it? Considering again Sipple’s title for this collection: What would Jesus do? He would drink PBR and eat a burger, and counsel the speaker on how to set up her online dating profile: “You ain’t interested/ in any dick pics, so you might as well pick/ the app for lezzies. Find at least one full body/ photo. No point in hiding now.” He would say that, wouldn’t he, if we’ve been listening? Savannah Sipple has been listening. To all of us. Let’s stop hiding, y’all. And give a big welcome to one of our most vital new poets.

—Justin Bigos, author of Mad River and co-founder and co-editor of Waxwing 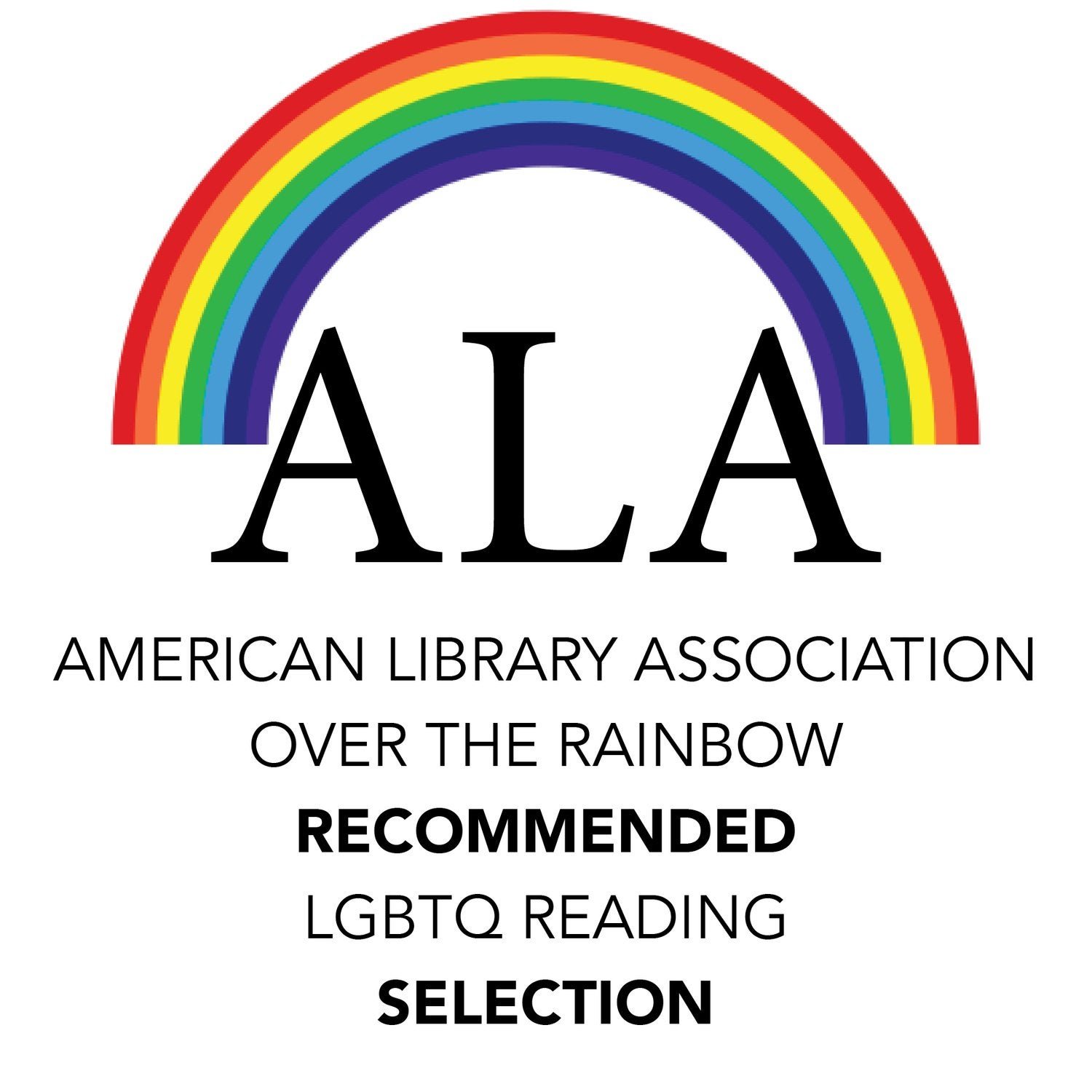 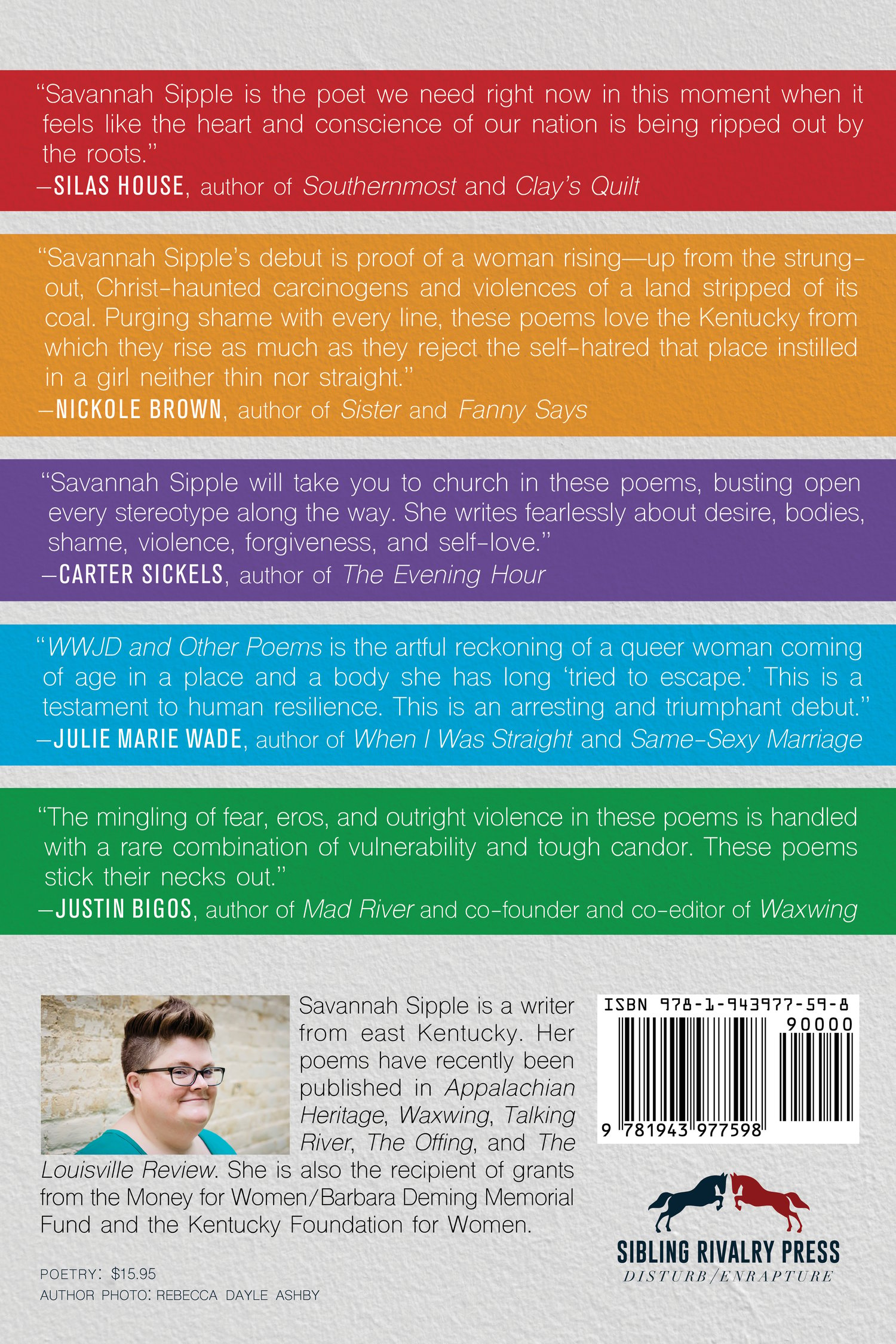 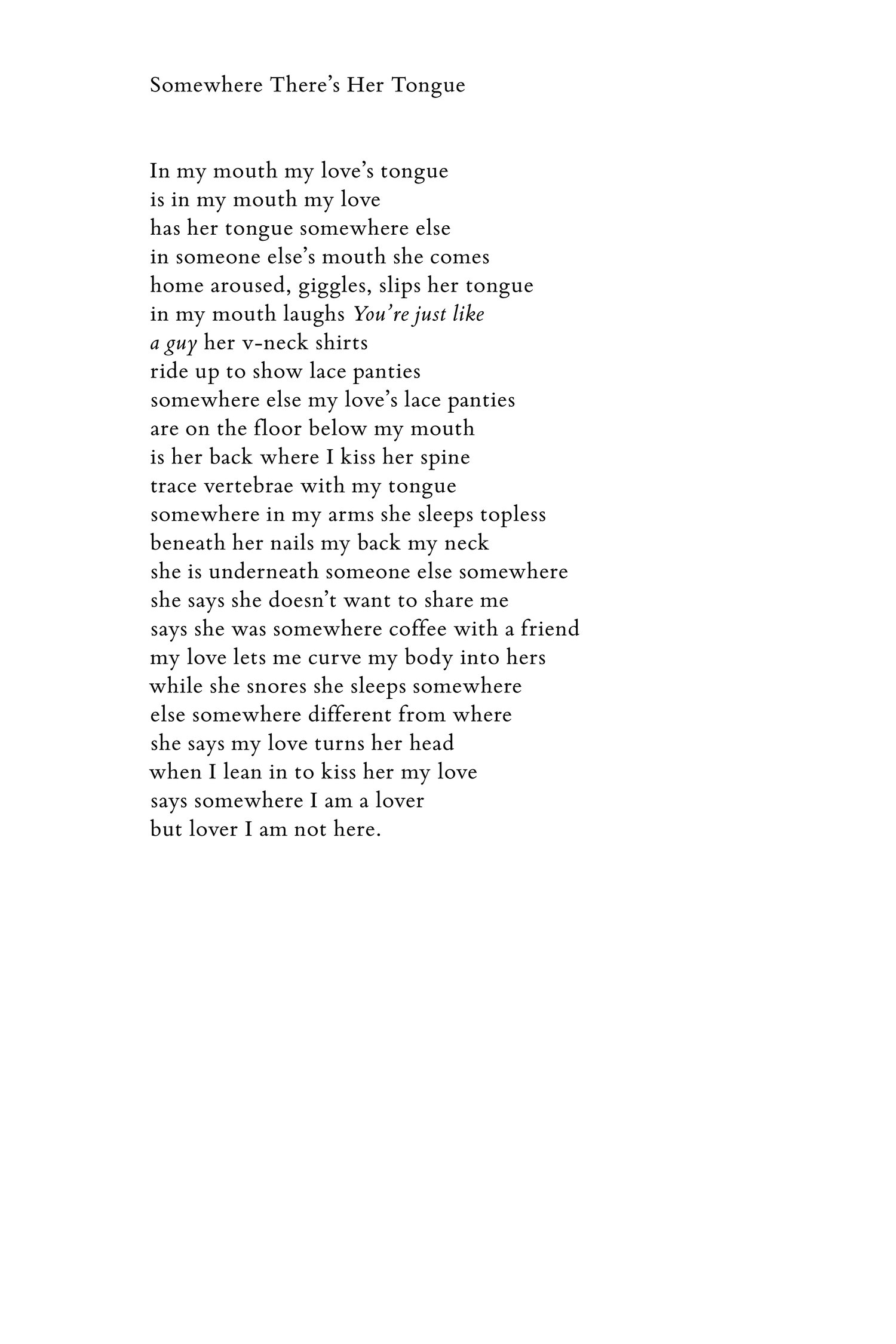 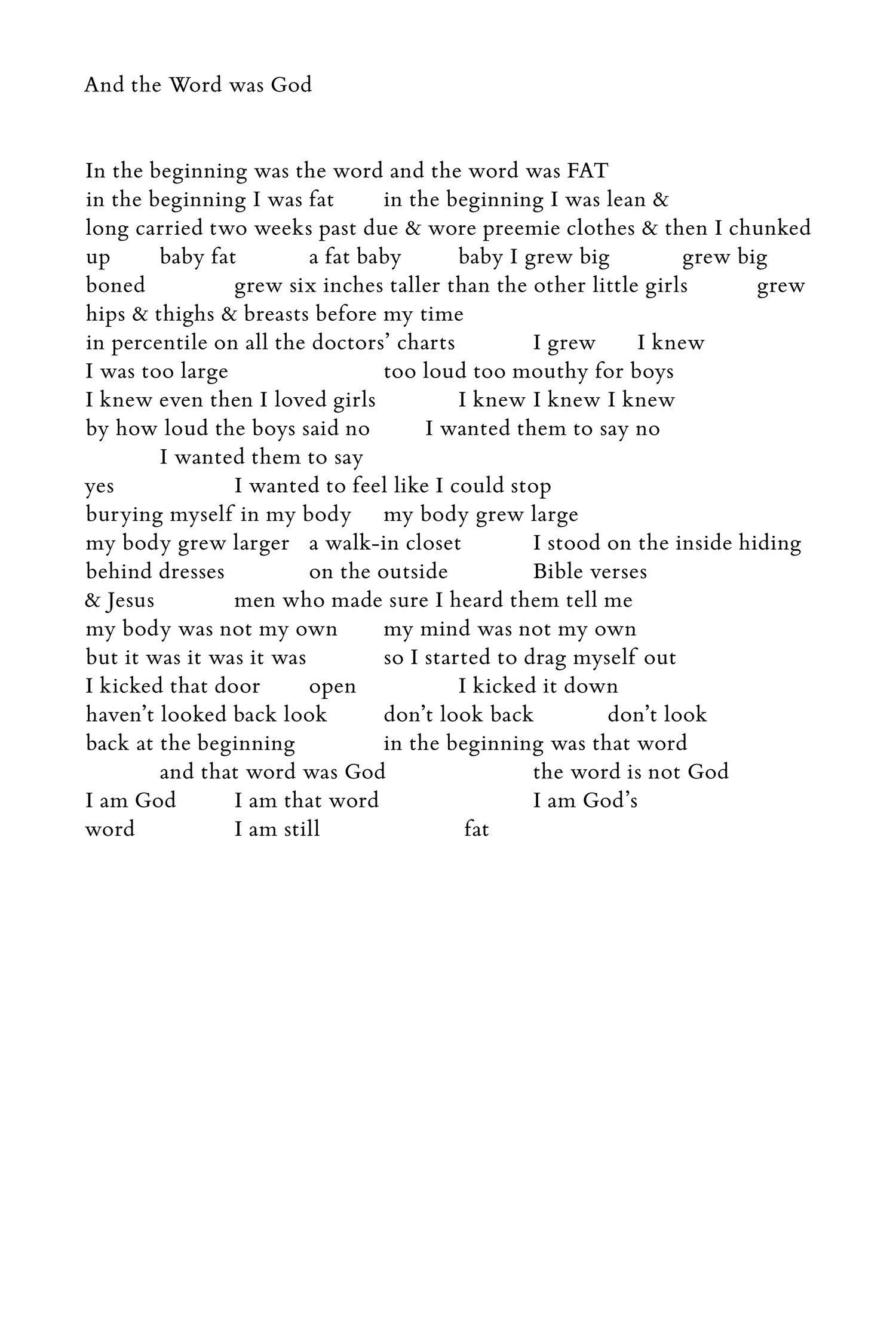